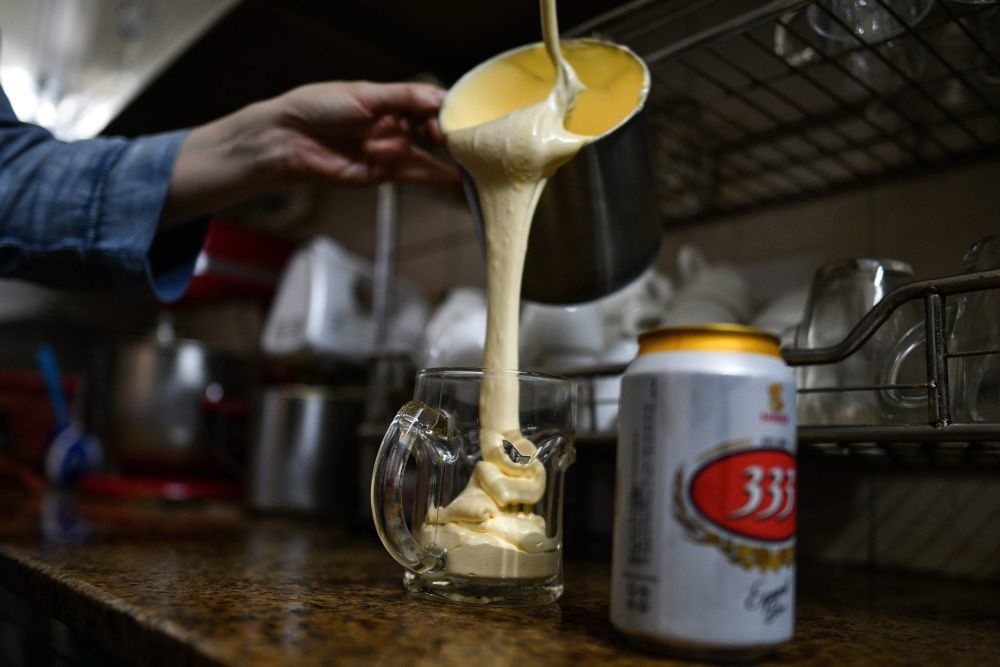 The staple menu item at Giang Cafe in Hanoi's pulsating Old Quarter is made with ice cold beer topped with creamy egg yolks whipped with sugar and butter. Photos by AFP/Manan Vatsyayana

A decades-old Hanoi cafe is delighting drinkers with a frothy beer cocktail that has no place on a breakfast menu.

Scrambled, fried, or ... whipped into beer?

The staple menu item at Giang Cafe in Hanoi's pulsating Old Quarter is made with ice cold beer topped with creamy egg yolks whipped with sugar and a touch of butter to boost richness.

Owner Nguyen Chi Hoa said he came up with the recipe in 1999, curious how the combination might turn out.

"I made egg beer just for myself ... I thought it was good, so I decided to give it a try to see if anyone agreed," he told AFP in his packed terracotta-tiled cafe.

The creamy beer concoction wasn't such a dramatic departure from his most popular menu item: Vietnamese coffee topped with sweetened egg froth, now enjoyed in cafes across Hanoi among locals and tourists alike.

Hoa claims it was his father who came up with the recipe in 1946 as an affordable alternative to the cappuccinos sipped by French colonial occupiers, who made them with cow's milk - a luxury ingredient for most Vietnamese under French rule.

"Poor people could also drink egg coffee because they had lots of chickens, so they just cracked an egg, added sugar and mixed it together - then we had egg coffee," he said in the cafe where black-and-white photos of his family hang on the walls.

Hoa didn't stop at coffee and beer, and he also offers frothy eggs drinks made with rum, matcha, chocolate and even Coca Cola.

To keep up with demand for his whipped delights his daughter cracks 1,000 eggs every morning to be beaten by machine throughout the day.

Though many of Hoa's customers have never heard of egg beer, he said he has won most over - especially those from beer-guzzling Germany - and sells up to 20 mugs a day.

"It's very special, it tastes like dessert, plus the beer," said Malaysian visitor ST Lim.

In a city better known for its ubiquitous open-air beer markets called "bia hoi", Hoa said his unique beer beverage is still met with scepticism by some.

But he's hoping to sway them - even beauty-conscious drinkers: "This is very good for your skin, bright skin," Hoa said with a smile.

Let's try this with our hanoi street food tour