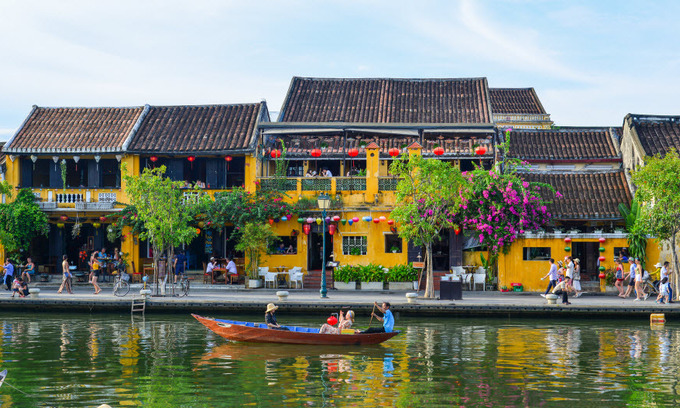 Yellow old houses are seen across the Hoai River in the ancient town of Hoi An, central Vietnam. Photo by Shutterstock/Hung Minh.

Google trend results for last week show that the 400-year-old town Hoi An was the most searched keyword by Vietnamese internet users.

The interest was sparked by the Google Doodle on Hoi An on the search engine’s homepage. It even pushed results of the 2019 national university exam to second position, according to Google’s data.

The Google Doodle featured the image of Hoi An with symbols of the Chua Cau (Pagoda Bridge) and colorful lanterns on its homepage last Tuesday, coinciding with the traditional Lantern Festival, which is held on the 14th day of each lunar month in the small town.

The Google Doodle is a special temporary presentation that commemorates holidays, events, achievements and people. It was the first time that a Vietnamese destination was honored by the tech giant.

The ancient town of Hoi An was recognized as a UNESCO world cultural heritage site in 1998 and has become one of the top holiday destinations in Vietnam, attracting nearly five million visitors last year, including 3.7 million foreigners.

Last year, the town in central Vietnam was ranked second among the list of 10 safest and most exciting places on the earth for solo travelers by travel editors at Momondo, a U.K. based travel site.

The town got another feather in its cap when global readers of the American news network CNN listed it as one of the 16 best places in the world to relax in and get rid of stress.