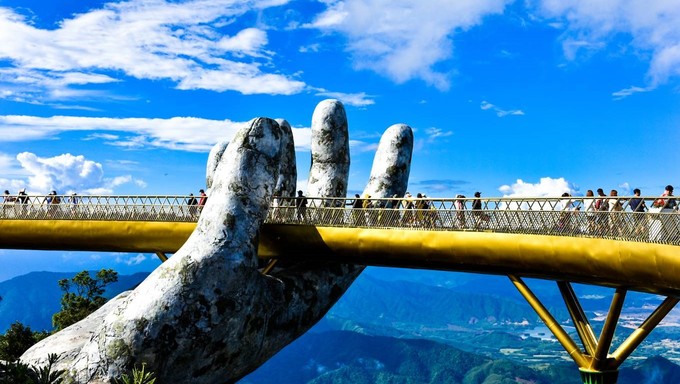 The Golden Bridge in Da Nang is designed to make visitors feel like they're taking a stroll on a shimmering thread stretching across the hands of gods. Photo by Shutterstock/hoangkyphong

Bookings for the additional flights opened online on March 7.

Air Busan will also operate more flights between Busan and other famous tourist destinations in Asia like Nagoya and Osaka in Japan, Kaohsiung and Taipei in Taiwan, Cebu in the Philippines, and Hong Kong.

Betting on a higher volume of Thai arrivals to central Vietnam, Malaysian budget airline AirAsia has announced flights from Chiang Mai to Da Nang. The first daily flight is scheduled for April 12, and bookings are already open.

Yet another South Korean airlines, Asiana, is also operating daily flights between Busan and Da Nang.

South Koreans have surpassed Chinese visitors to become the largest group of foreign visitors to Da Nang, with more than 1.4 million arrivals in 2018, up 80 percent from a year ago.

Apart from its long and beautiful beaches and breathtaking natural landscapes, an open visa policy is also a big draw among South Korean holidaymakers. Vietnam offers a 15-day visa exemption for visitors from South Korea.

Once a war-torn city, Da Nang has come a long way to become a formidable tourism hub in the nation and region.

It is home to Asia’s most beautiful beach, My Khe and a neighbor of the ancient town of Hoi An, another tourism hotspot. It also hosts the highly popular International Fireworks Festival every year.